It’s that time of year again – time to rest the fields and move the ponies for winter.

After the farrier’s visit, we rode and walked in convoy from the east to the west of the island – about 4 miles.  Four of the six island ponies stay together for the winter.  It is interesting to see the dynamic of this small group.  Holly, my big Irish Draught X is dominated by the cob, who has become lead mare.  The two Shetlands have fought it out and Logan, my wee boy, has been usurped from his position as lead ‘pimp’.  It breaks my heart to see him standing on the periphery and there is little I can do about it, except give him extra cuddles. 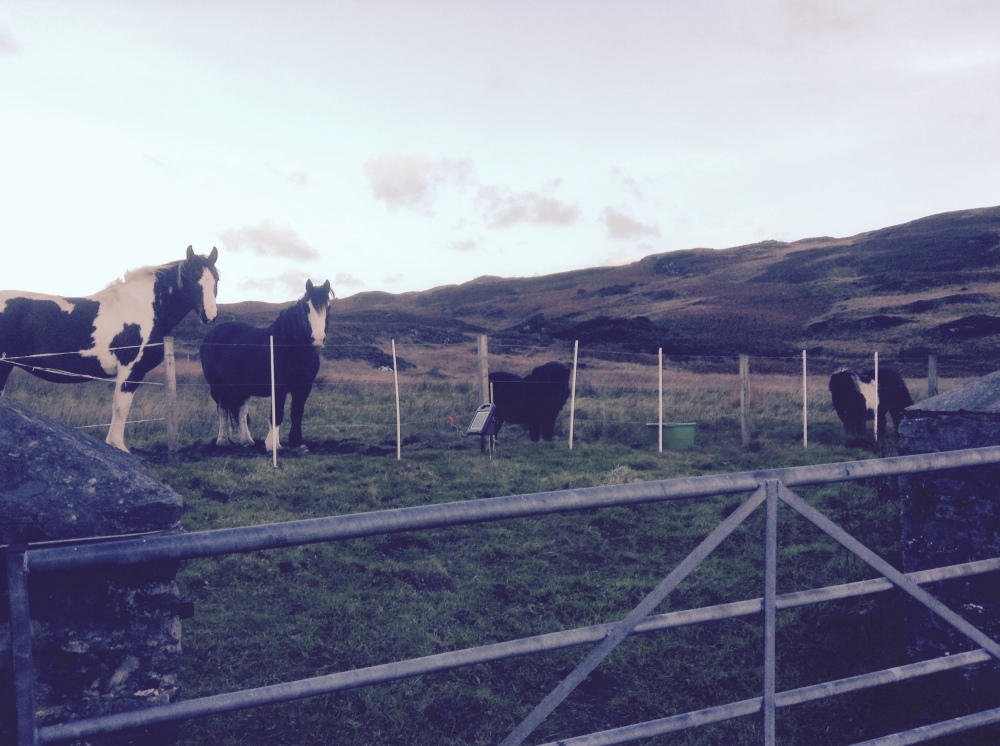 The field at Kilchattan has buildings and gorse for the ponies to shelter behind. I say shelter but the westerly winds can be cruel, proffering horizontal sleet storms and pelting hail. Then there is the usual dilemma – to rug or not to rug – and much as we’d prefer not to, sometimes it is necessary. Afterall, we are an island at the edge  – next stop Canada! 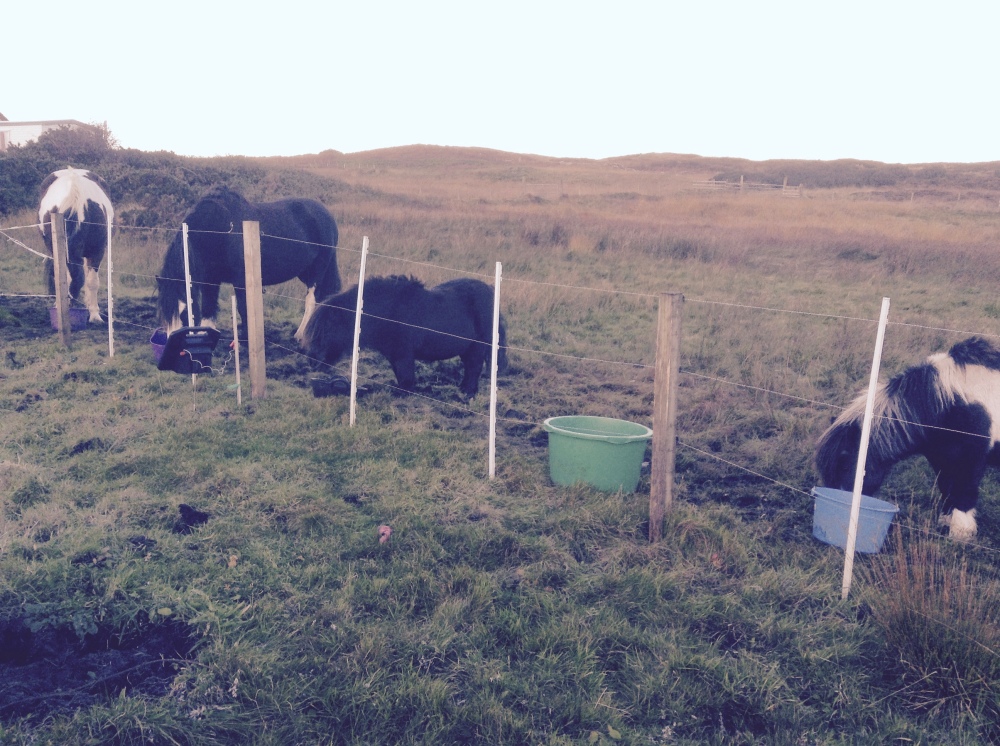 Getting hay for the winter is either hard work or expensive.  The crofters who provide their own have had to invest in tractors and balers and will sell whatever they have left, which usually isn’t much.

I have learned the hard way.  The first year, up at Watty’s field, we gathered hay by hand and stacked the old-fashioned way. That was satisfying work. When I was down to the last bundle, however, it was worrying to hear that my new order of hay from the mainland was to be remain precisely there, due to cancelled ferries.  Thankfully a kindly farmer threw the ponies a bale or two to keep hunger at bay.

I now order well in advance.  The hay has come from Stirlingshire via Islay so it isn’t cheap but is deliciously sweet, the scent conjuring memories of heady summer days.

All hands were on deck to help unload from a lorry and reload onto trailers. The rain was pouring down and everyone was soaked to the bone. We borrowed a humongous tarpaulin to cover the hay in between loads, the water quickly forming pools and puddles in the dips and creases making it even heavier to drag on and off.

Holidaying teenagers were on hand to stack at Little Hampton, their childhood antics forming fond memories of Colonsay, to be conjured up some day in adulthood.

Bales are toppled from a great height,

Landing with a deadened thud.

Fingers are whitened by twine,

As its tightening grip burns.

Heaved up, levered and heaved some more,

As the rain pours and pours,

Drips down the neck and soaked up through sodden leather.

Trundling along past browning heather to Little Hampton,

There greeted by giggles and laughter,

As children stack, forming steps and stairs up to the rafters,

Flopping down on their grassy seats with puffed sighs of relief,

Until the next load arrives.